Covid Dilemma #1: Save Lives Versus Save The Economy

As countries begin to see results from aggressive social distancing, pressures are mounting daily to lift restrictions and return to a state where gatherings of all kinds, both work and play, are again the norm. Three main arguments for this are: first, that the real danger has been averted through flattening the curve and this reduces the threat of serious recurrence, second, that the economic costs will cause greater damage than the loss of a few lives, and third, that the real health impacts have been exaggerated from the start and are not evenly distributed across the population. Not all people need to be locked down, goes the thinking. 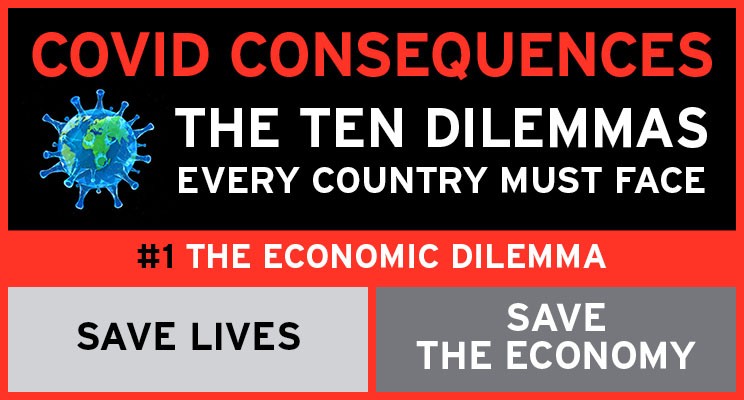 While economists focus on the immense suffering that is caused by a depressed economy, the thing medical professionals fear most about COVID, is getting the timing wrong and triggering another wave of infection. History suggests that second waves tend to be worse than the first, which is on the minds of many planners in business, academia, and government. And, politicians, must also factor their electoral prospects into their decision-making. President Trump underestimated the threat early on, and this is likely to hurt him in the upcoming election, as the US leads the world in diagnosed cases and deaths. Leaders such as Jair Bolsonaro in Brazil, who chose to blatantly disregard the virus, face similar challenges, and must hope for soft landings. Opening the economy may be a necessary but dangerous game of chicken, played against an enemy (Mother Nature) that is as Thomas Friedman describes, immune to human emotions and optimism and pessimism. The spectre raised by some infectious disease experts that surviving COVID may not guarantee immunity only raises the stakes.

Blaise Pascal, the 17th century mathematician and father of modern probability theory, had an interesting approach to measuring risk, which he applied to the question of whether God does or does not exist. Simply expressed, he concluded that the consequence of not believing in God, should God exist, was much worse than the value of any earthly pleasures one might enjoy by living a Godless life. In the case of COVID-19, at least in the short term, miscalculating the health question is akin to God; get that seriously wrong and there is hell to pay.

Mapping the two dimensions onto a 2 x 2 grid produces four possible scenarios. Upper left, Health First, is the path many countries have followed thus far. Fix the health problem, and then we can get on with other important things. Spend whatever it takes to flatten the curve of infections. 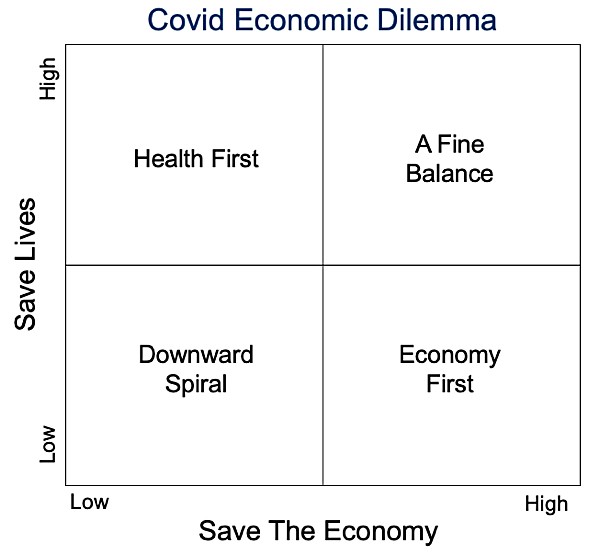 Lower right, Economy First, is the option initially pursued by countries like the UK, Italy and now, Brazil. At its best, such a strategy leads to quicker herd immunity with minimal economic damage. But it is hard to sustain when people are suffering and elements of the health infrastructure are overwhelmed and collapsing. It depends on a) the populace being willing to accept short-term heavy losses, b) people having no real choice (as in totalitarian societies) or, c) a very low rate of infection.

Upper right, A Fine Balance, represents an integrated approach which recognizes the importance of both objectives. Spending decisions and local policies are formulated with both health and the economy in mind. Sequencing and phasing of efforts occur tactically to permit focus to move where it is needed. The two objectives are pursued as highly interdependent elements of an overall strategy. Being generous, we could say this is happening to a degree in different parts of the world. Infections and deaths have been significantly lower in countries such as South Korea and the Czech Republic, where response to the crisis was quick and effective, while extreme restrictions to businesses and restaurants imposed elsewhere have largely been avoided. Other countries like Germany, New Zealand and Canada have also been reasonably successful in coordinating the two efforts. And now, China and parts of Europe are cautiously experimenting with reopening segments of their economies, while keeping a watchful eye on health impacts.

And finally, in the lower left, we have Downward Spiral, clearly the least appealing of the options. This is the scenario where health efforts are largely ineffective, the economy sputters and loses steam, and failures in one area cause and reinforce problems in the other. We have yet to see how well and quickly the Italian economy will recover, especially with its heavy reliance on tourism. While it is still early days, New York City offers an example of recovery, and just how costly and difficult this can be. And reports out of Mexico City that health statistics have been seriously under-represented are now raising serious problems.

In practice, the matrix is not static. Countries that started out trying to flatten the curve at all costs must now mix prudent safety measures with economic re-opening. Those that hoped to escape closing their economies at all, are now paying the price and must shift accordingly.

Making the Case That the Economic Dilemma Is Politicians’ #1 Priority

For each of the 10 COVID-19 dilemmas, we will be examining key drivers that should be of concern for leaders. We are NOT saying this is the most pressing of the 10 dilemmas. Rather, we are exploring factors that need to be considered.

Tune into any news outlet, and you will see the argument laid out for reopening the economy. It’s rarely a matter of whether or not to do it; that is a given. It’s more a question of when and how. Here are four powerful reasons this should be the top priority of governments:

1. Urgency – Pressure is building, like the water behind a damn. People are feeling desperate and losing patience. Governments are spending money they don’t have. If we don’t address this, it will burst and overflow.

3. Recovery time – It’s reckless to allow economic fundamentals to decline too far, since the cost and effort to restart go way up once we pass a threshold…which is not far away.

4. It’s the #1 Worry – Along with health and safety of family members, this is what people are most worried about.

1.     Respect the inherent interdependency: These two objectives, health and the economy, are inextricably bound together. While it is tempting to ignore one as we concentrate on the other, this isn’t easy or wise. Both need to be attended to, separately, and in relation to each other.

Recommendation: Intentionally overlap planning and action efforts in two ways: 1) establish an oversight, coordinating group with members and experts from both areas, and 2) imbed members from each domain into planning groups dedicated to the other area.

2.     Naivety is not a strategy: While it may be tempting to minimize the dangers and the costs, this is wishful thinking, dishonest, and ultimately dangerous. It is also naïve to think that ending the lockdown in itself will solve the economic problem. A lot of evidence suggests that the fall in retail sales or restaurant meals is itself caused by fears of catching the virus, not government restrictions. It is the responsibility of leaders to assess the risks, options and costs of this situation, and to plan realistically and be upfront with citizens about what is really going on. When governments are not straightforward and accountable, they erode trust, which is ultimately unhealthy and debilitating

3.     Spend now to advance both goals: The COVID pandemic is having transformative impacts on lives and economies around the world. Spending on COVID-19 support varies widely around the world, from as low as .2% in Russia and 2.9% in the UK, to 10.7% in the US and 20% in Japan (all %’s measured against GDP). Worrying about affordability needs to be balanced against the full cost of future recovery.

Recommendation: Accept that this is expensive no matter what you do, and carry on with protecting those parts of the economy that merit saving and which contribute most, keeping in mind a range of values such as jobs, production capacity, health and well-being, etc. This is the time for spending strategically, viewing these costs as essential investments in a viable future.

4.     Prevent landing in the lower left quadrant: It is a slippery slope into the dysfunctional abyss of the Downward Spiral. Moving in that direction is possible for any country, and should be prevented at all costs.

Recommendation: It’s easier to stay afloat than to get back in the boat after it has flipped. Much has been written about the power of momentum, both positive and negative. Avoid the slide before it is too late to stop. Set markers to indicate when you are in trouble; build emergency plans to deal with crises and prevent collapse, and, be honest with stakeholders and citizens to share the pain and avoid shocks and blame-calling.

[By Alex Lowy and Phil Hood. Coda: Last week we published a quick look at the special challenges–Covid dilemmas–facing governments as they attempt to slowly spring back from the initial attack of the coronavirus. This was the first of ten deep dives we’ll take into implications of these dilemmas. If you’re interested in the topic, please comment or like this article. You may sign up for notification of future discussions at transcendstrategy.com.]